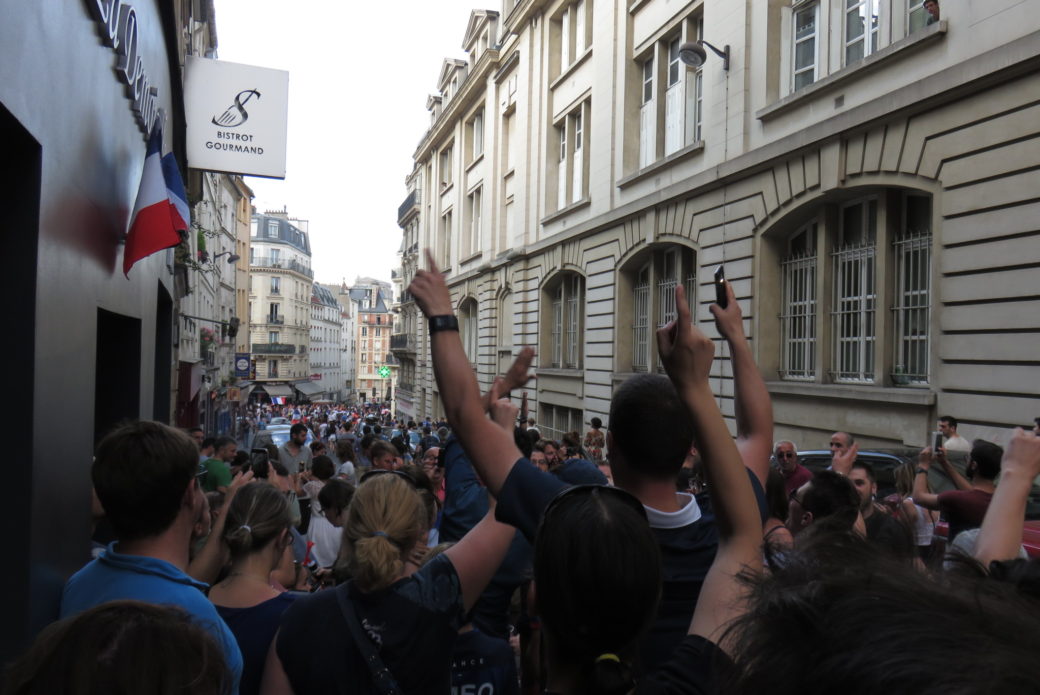 France has won the World Cup. Does said cup runneth over? Is it half empty or half full? And do they now have the whole world in their hands? My inquiring mind wants to know.

I’ll spare you a post on what their win may, or may not, mean for immigration and race relations here in France and, quite frankly, abroad. There are articles and posts just about everywhere dissecting these issues with much more intelligence and depth. I’m no scholar, nor do I have the “receipts” to back any of my own personal feelings concerning the subject. And let’s just say, my feelings runneth over. What I will share is what I observed during this Word Cup Madness.

The French are typically nonchalant and laid back. They’re wine sippers, not beer guzzlers. During the beginning stages of the Cup, those I spoke with either didn’t give a shit or were pessimistic as all hell. My son and I were more excited and, from the get-go, I believed France would take it all. I felt that the particular make-up of the team was an extremely motivating factor, and I was placing all my chips on black, I mean, Les Bleus.

At first, I stayed home and watched some of the matches with my son. He has a degree in Sports Management and, by the end of the World Cup, I had a degree in soccer. Okay, not a degree, more like a certificate acknowledging my participation in a one-day football intensive. He and I discussed – as well as researched – the backgrounds of all the players. If you don’t mind going down a rabbit hole, I’d definitely suggest you do the same. But, like I said, I’m here to discuss feelings. I’ll leave the facts to the experts and Google (or are they one and the same?).

As France began to win game after game, the Parisians I spoke with were still freaking pessimistic. It’s a thing, although I thought, with the much welcomed sun we’d been having, that they’d be a lot more excited. Side note: Parisians are grumpy vampires. During the winter months, the city of Paris is like a coffin – no sun, dreary and enclosed. And this winter was a bad winter. As soon as the sun makes an appearance lasting more than a day or two, the Parisians come to life – smiling and laughing and sipping their wine. Okay, they always sip wine, but now, with a little sunshine, they do it happily. Yet, they could not find the rays of hope hiding behind their overcast-ed clouds of doubt.

Now, let me just state, for those who don’t know me or are new to my blog, I absolutely hate crowded spaces. My anxiety levels go through the roof whenever there are, oh, let’s say, more than three other people in the room. So, the idea of going to a small wine bar (I thought the sippers might be less intimidating than the guzzlers) was paralyzing. Off I went to watch the semifinals with the hubby, who was still in town (my son had already returned home to NY), and who was just as curious to see what a fellow sports fanatic looked like in this foreign land. My husband is obsessed with sports. It’s his mistress, and no wife likes a mistress; therefore, I really, really, really, really don’t like sports.

Anyways, as I sat there among all the mistress-obsessed junkies, my face painted with the French colors, I got swept up in the excitement, while keeping my eye on the door in case I needed to make a quick getaway. Les Bleus were going to the finals, and my husband was returning home to NY the very next day. I would be alone in Paris, alone with my adopted family, to share in their moment. I contemplated staying in my apartment. Isolated. Away from what were now wine guzzlers. But how could I sit this one out?

Over the past few weeks, I had made new friends, many of whom urged me to come share with them this moment. Because that’s what winning is – a moment. An exact moment when everything aligns perfectly. It’s an exhilarating feeling. Sure, you can try to ride that wave minutes and hours and days after. But that moment, the moment you know you’ve got this, well, it’s everything. Everything slips away. Every fear. Every doubt. Every disbelief in yourself, as well as others. Every negative emotion, including everything you thought mattered in the world before that precise moment. It’s an odd feeling to observe, much less feel, as I, too, was swept up in a moment – more like half a moment. Okay, half of a half of a moment.

I stood in that packed bar and watched as the crowd cheered and yelled and sang and celebrated their French team, a team made up of players whose parents or grandparents or great-grandparents had transplanted themselves in a new land. I wondered what those parents felt. Were they proud, and was that pride tinged with a bit of gloat as well? Those with whom I watched the match did not resemble the diverse make-up of the team. Yet, that’s not entirely true. As I partied way into the the night with my Parisian tribe, I soon discovered – as I’ve been continuously discovering along my journey – that you can’t always judge a book by it’s pale cover. There were Algerians, and Moroccans, and Tahitians, and Tunisians, and Egyptians, and, and, and… The ancestral pool was quite murky, far from crystal clear. Identity is soooooo complex and, when you mix this with nationalism, well, you’ve struck the mother-load of complexity.

And, so, I lift my glass and toast Les Bleus, while keeping an ever-watchful eye to the future.